Skip to content
G Uncategorized December 9, 2017December 11, 2017 3 Minutes
A controversial Australian naval exercise conducted with Saudi Arabia’s navy in the midst of the blockade of Yemen may be the beginning of more joint exercises between the two militaries, the Greens have warned.

Documents relating to a joint training exercise conducted on 14 August linked to Operation Manitou, a longstanding joint military operation in the Middle East, show the exercise was planned rather than occurring “opportunistically”, as Australia’s defence minister had claimed, the Greens say.

The Royal Australian Navy held training exercises with its Saudi Arabian counterpart near where a Saudi-led coalition is enforcing a naval blockade of Yemen – a move criticised by Human Rights Watch and other aid groups.

With the humanitarian catastrophe escalating in Yemen, world leaders, including the US president, Donald Trump, have called for the blockade to be lifted.

The United Nations has described the closure of aid channels as “catastrophic”.

Australia’s foreign minister, Julie Bishop, has said the Turnbull government is “deeply concerned” about the deteriorating conditions in Yemen, and has called “on all sides to allow unimpeded humanitarian access” to the country.

Asked about the joint exercises, Australia’s defence minister, Marise Payne, said Australia’s contribution to maritime security in the Middle East did not include any enforcement of the blockade on Yemen. 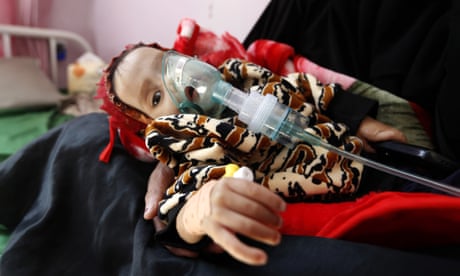 “We are in no way involved in that process,” Payne told the Senate. She said naval cooperation in mid-August with Saudi Arabia happened “opportunistically”.

But the Greens senator Peter Whish-Wilson said the material obtained under an order of production for documents showed that the “defence minister was being way too cute with the truth about the Australian navy conducting an operation with the Saudi navy on an opportunity basis”.

“The minister made it out as if these were two ships who passed in the night and decided to have a sleepover, rather than a carefully considered and prepared plan to undertake a joint military exercise,” he said.

He said the exercise should not have happened. “It beggars belief the navy didn’t think this would have any negative public relations blowback given the UN statements on the Saudi naval blockade, and global concern over potentially the worst humanitarian crisis since 1945.”

The documents are heavily redacted, but the small non-redacted sections suggest Saudi Arabia and Australia are interested in further naval cooperation, including embedding staff.

The documents confirm that on 14 August the guided-missile frigate HMAS Newcastle conducted a joint exercise with HMS Boraida of the Royal Saudi Navy off the Saudi port of Jeddah in the Red Sea.

The exercise consisted of “a boarding serial, some basic officer of the watch manoeuvres and replenishment approaches before both ships departed and proceeded independently”.

The material says both units were “keen for the interaction” and indications from Saudi Arabia were that the navy would be keen for further exercises “should units be passing through the region in the future”.

One of the briefing notes suggests a Saudi commander “repeatedly voiced his interest in more cooperation with Australian naval vessels in the area” and Australia suggested it could provide embedded staff.

Whish-Wilson said Australia needed to step back, given the growing international condemnation of the Yemen blockade. “The Greens certainly hope the decision to opportunistically engage doesn’t symbolise any greater government plan to use this exercise to build and strengthen ties with Saudi Arabia, including defence export sales.

“Saudi Arabia is undertaking a brutal assault on Yemen including bombing of civilian facilities and a blockade that is preventing food, medicine and fuel from entering the country putting millions of lives at risk,” he said.

“I am deeply concerned that it appears that we are planning to embed Australian military personnel with the Saudis at a time when this atrocity is being carried out.

“Australia needs to cut all bilateral military cooperation with Saudi Arabia immediately and condemn the blockade of Yemen that still hasn’t been fully lifted.”

A spokesman for Payne directed Guardian Australia to comments she had made on naval cooperation in the Middle East in late November.

Payne said the Australian defence force had been part of joint activity in the Middle East for “many years”.

“HMAS Newcastle has just departed, HMAS Warramunga has just gone to the area for a nine-month deployment,” the defence minister said.

Payne said “from time to time, as opportunity presents itself, we will work with counterpart navies to ensure that we are able, for example, in the event of an accident or in the event of a crisis on one ship or another, we’re able to support each other and engage and help each other”.

She repeated that Australia was not “involved or engaged in any of the activities that Saudi Arabia might be pursuing in terms of its blockade in the Gulf”.

“We are also not involved in any way in the conflict in Yemen; there are no ADF personnel in Yemen, we are not engaged in Yemeni airspace or in the seas around Yemen in that regard.”